By adding some markup (Microdata or JSON-LD) to the HTML emails you send out, Gmail can now display quick action buttons next to your email.

Some might see this as simply another random extension, or a Gmail gimmick à la Gmail Labs extensions. We rather see it as part of a trend in which communication channels and devices are changed into platforms supporting an entire “ecosystem of apps”. Mobile phones used to be for calling, emails used to be for sending someone a text message (and I guess sunglasses used to be for just protecting your eyes :). Not anymore. All these things have turned into platforms with many apps running on top. All this added functionality makes it much more interesting for consumers, and more exciting for developers to hack new apps on top of. The companies behind them of course know that they can win the real battles by having the better ecosystem (would you switch to Windows Phone if it doesn’t have your favorite YouTube app, or to Hotmail if it doesn’t have your Movies Info app). 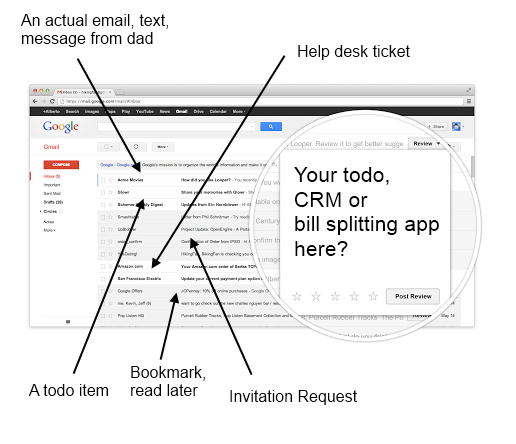 Many people would agree that email as it works today just isn’t good enough anymore. People try to use it for much more than it was originally intended. It’s no longer just a way to send people a message, it’s also a todo list, a CRM application, a help desk, a way to organize events, split bills, and much more. Because of this, the way email works desperately needs to be changed, at least extended. 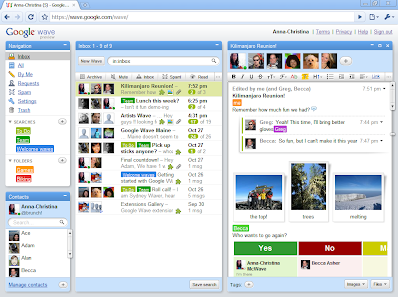 One approach is to completely reinvent email as we know it, Email 2.0. We think this is a step in the wrong direction. One famous example of a very cool but failed attempt is Google Wave. It’s exciting to work on these projects, and of course developers love to completely rewrite and reinvent things, but let’s not forget email is already very popular and it’s hard to make everybody switch. It’s also not needed, which brings us to the other alternative: there are many ways email can be extended with new (open!) standards. It’s called Actions now, but it might look more like complete “email apps” in the future. We already know people want to use their email more effectively, and in fact using some clever hacks, some “apps” were already built and proven to be popular (Rapportive, for example). Plus, as a platform, it’s already used before as a “human API” to build services on (like sending an email to trigger some action like creating a blog post, an invoice, or – like with a weekend project of ours – create an online form).

One of the reasons email is so popular is because it just works, everywhere. So of course we need to deal with things like mobile views and graceful degradation to make sure that remains to be the case. But a player like Gmail is big enough to take the first step into allowing developers to build more apps around email, using new, open standards. And I believe that with us many other developers would be happy to write them, and make email much more powerful and effective than it is today.

4 Replies to “Email as a platform”