The web used to be a beautiful place. Those rolling pastures of fast loading simple HTML, the fresh smell of web 2.0 gradients, the spotless fields of minimal libraries. Sure, our navigation wasn’t as advanced as today, but the waters were clear and easy to surf.

Over the years however, an icological disaster of petaproportions has been unfolding. I’m talking about the wave of toxic trackers, social media plugin spills, poisonous popups, chemical cookie banners, and all the other garbage that has slowly turned the clear web waters murky. With January being the time for new resolutions and new ideas, let’s make this the year we finally start to take action, clean up, and make the web usable again.

There have been plenty of cool trends as well of course, but some have been one step forward and two steps back. Sure we got rid of some pop-up window ad dialogs, but only to find them replaced with exit intent popups, mouse cursor heatmap trackers and being tracked on every page by FacedIn and friends. It’s making the web unreadable and we should fix it.

Let’s look at some examples of web pollution. Some are so hilarious it looks like parody; how I wish that was true (nothing’s photoshopped here!) 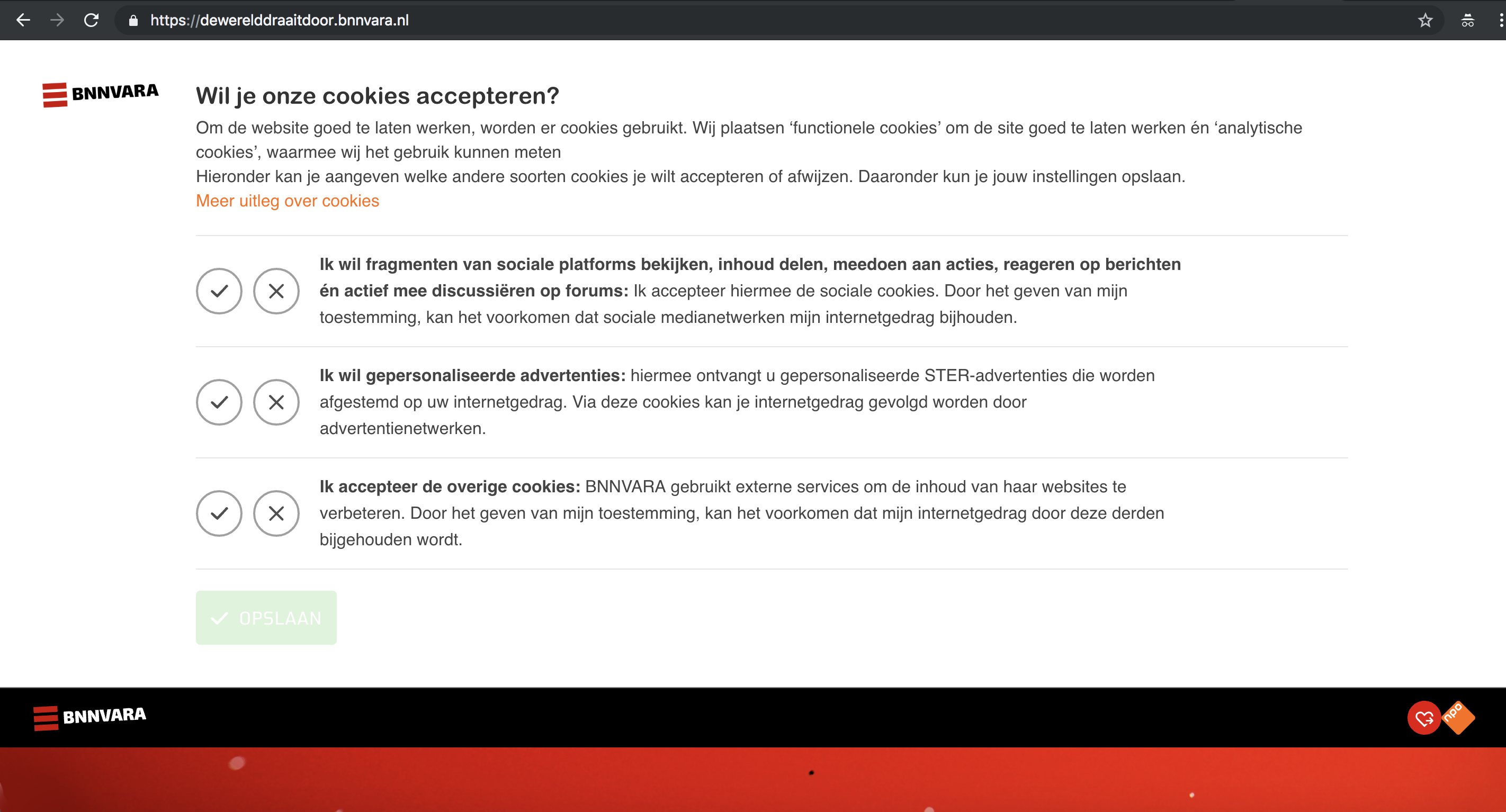 This is an example from the Dutch public broadcaster. It doesn’t matter what is says (yes it fills the entire screen, you need to click all buttons, and it looks like a website to configure the internet, doesn’t it?). Our Crapbar Rating ™: 4/5.

This is the plastic bag of web pollution. It’s simply everywhere. While it has done nothing to stop data collection (obviously cookies are just one of the many tools for tracking), it sure did make it more annoying. Some types of cookies don’t even require a pop-up (a privacy policy in the footer is often fine), and regulators certainly didn’t specify a minimum in obnoxiousness. That doesn’t seem to stop many websites from showing a humongous crapbar covering the whole page. It’s even more pointless because many sites load the cookies anyway and the crapbar just informs you they’re doing so, while the whole point was asking consent. 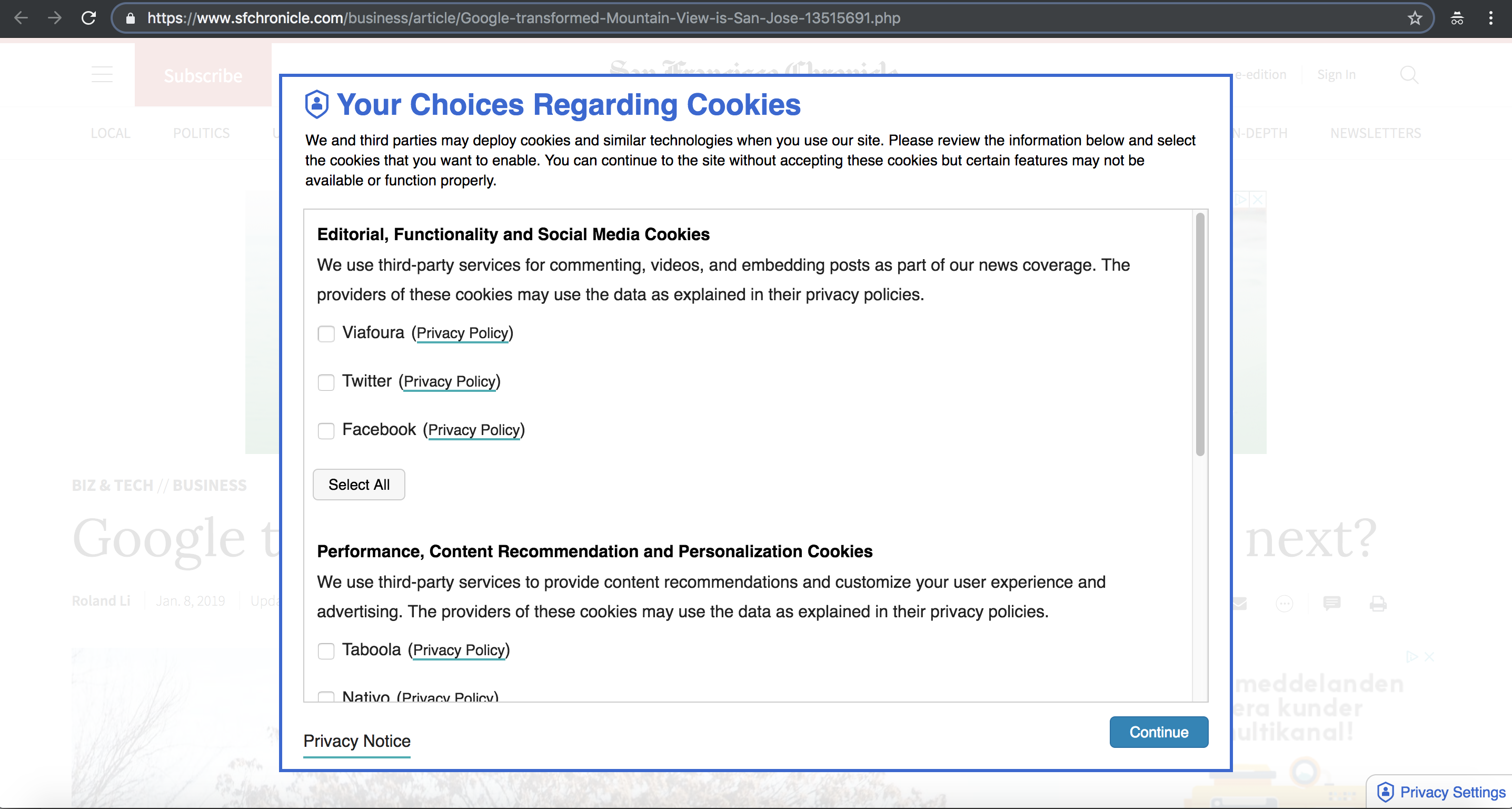 Like the cookie crapbar, its friend the GDPR crapbar, pop ups in most places these days. Don’t get me wrong, the idea behind GDPR is great: respect people’s privacy. In practice, however, that often means don’t change anything but just show even larger and more obnoxious dialogs. I also like how they give you all these options of trackers and ads to “opt-in” to. Who in the history of the internets has ever voluntarily clicked on any of those? If you know the answer already, just don’t ask. Ironically all these pop-ups have also made browsing in Incognito mode or Firefox containers, handy tools to prevent tracking sessions, completely unworkable, with more tracking as a result.

This GDPR crapbar is so large, that the cookie crapbar on top hides the underlying GDPR consent button, which you would have to click to continue (but can’t). Good Times. Crapbar score: 5/5. 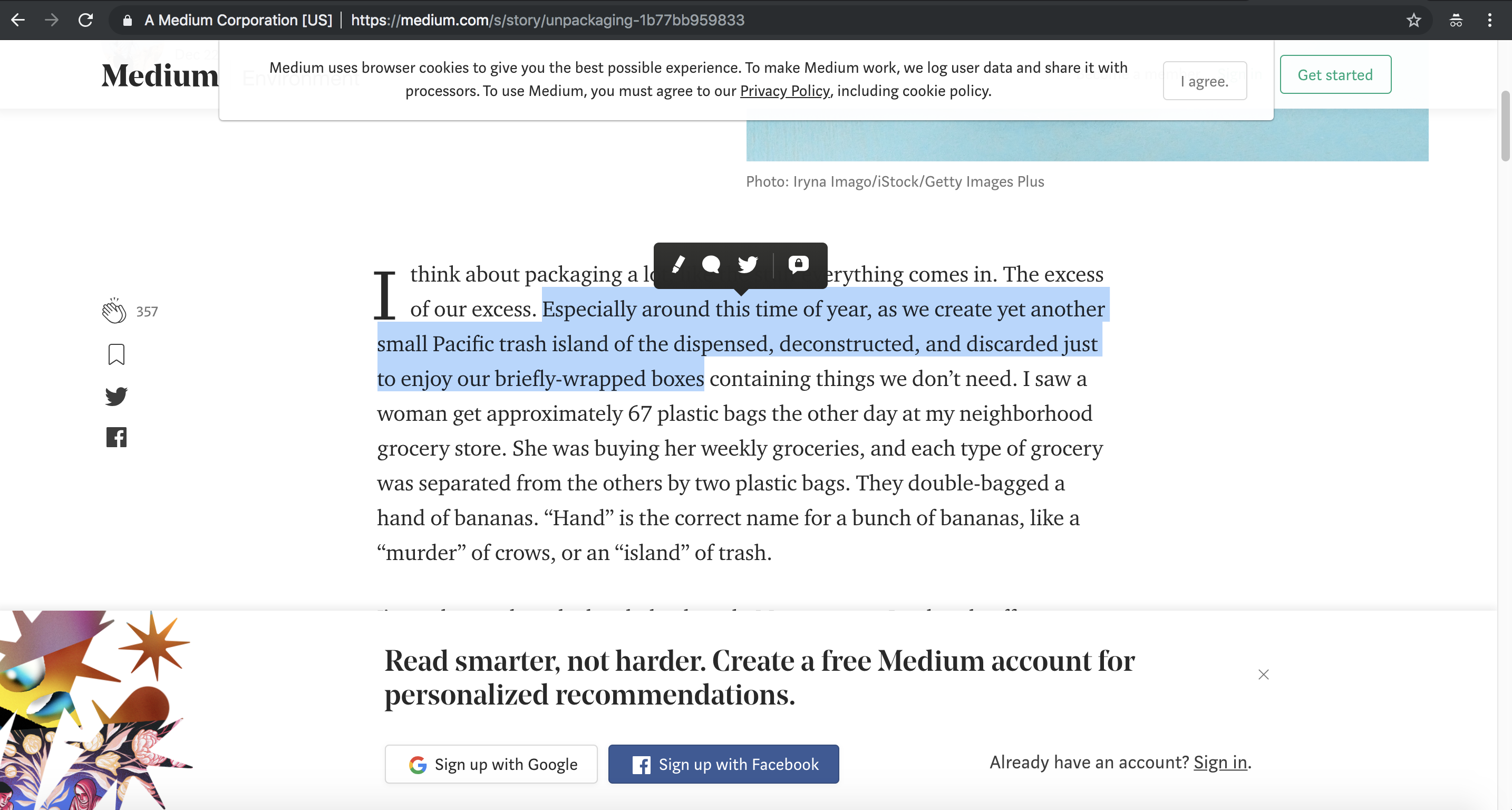 Pardon the interruption, 3 crapbars per paragraph.

A polluting trend that can’t be recycled quickly enough as far as I’m concerned, is adding all kinds of sticky bars and things that pop-up while reading and scrolling. In the example above there’s not a whole lot of room left for the actual text between the slats. You might think I’m vertically challenged and should just get a larger screen, but people also read on laptops and mobile devices.

I also don’t get the trend of having to override selection behavior. Yes, I’m a selection reader, I select stuff while reading. And no, just like the rest of humanity, I have never ever clicked on the “Tweet this selection” button.

Another related web pollution trend is the exit intent popup dialog. There you are, casually surfing an online store for some new running gear, scrolling thr.. and boom, intent crapbar. Close tab. Or throw mobile, where it’s even worse. 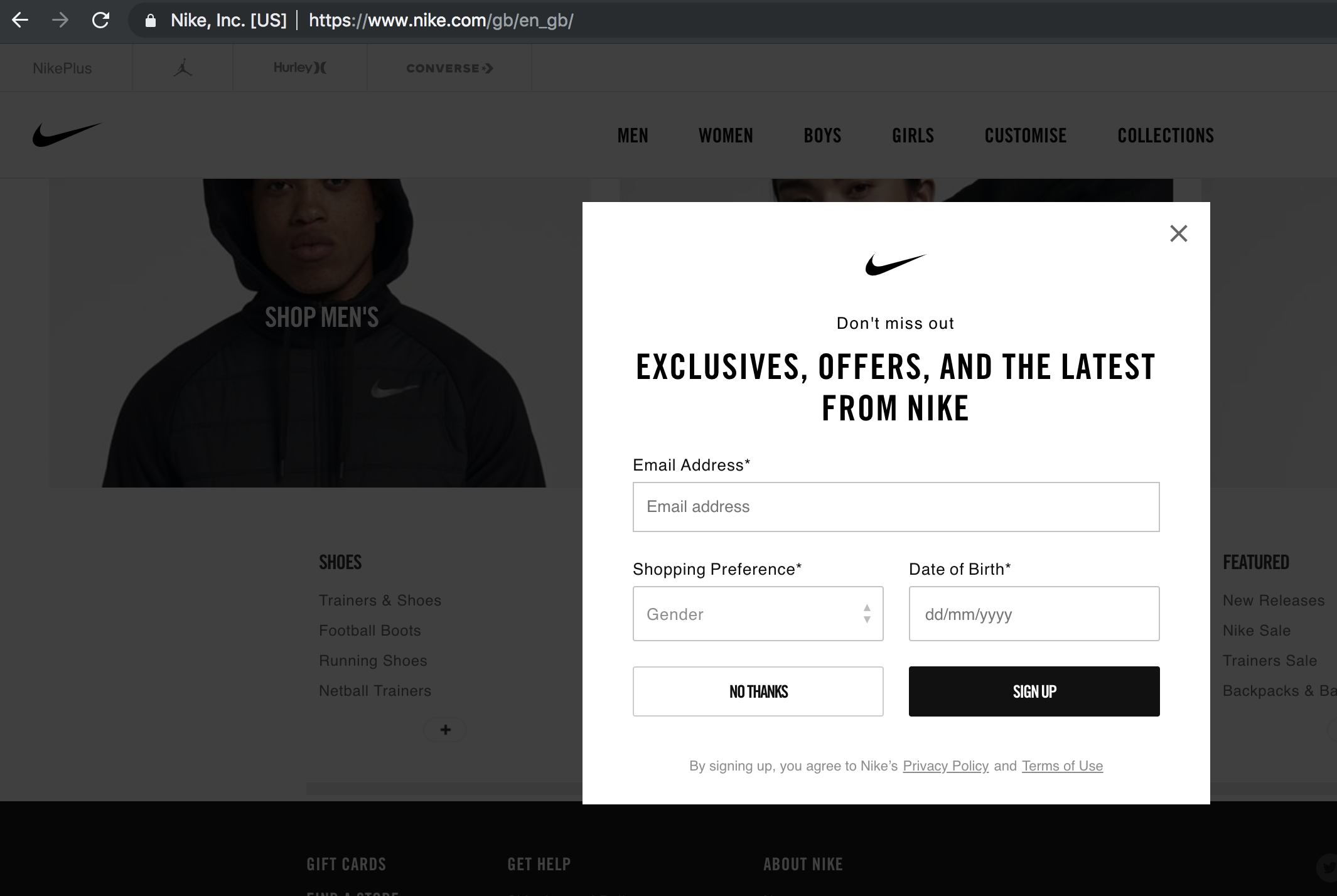 I could go on and on. There’s many more examples (“install our app to continue!”, “ding ding, our chat is offline “-popup crapbar), but I think you get the idea!

This one is not really visible, except maybe from the very slowly loading progress bars, especially on mobile devices. Let’s call it the noise pollution of the internet. There’s even startups now to help track all the trackers you’ve installed. Clearly we need more trackers. Good thing you have that huge cookie banner so it’s all good.

I’m not sure how people get to these designs. Perhaps it starts with a brainstorming meeting where everyone shouts out their favorite analytics, A/B testing, or social media platform, and then they compromise by including all of them? It is because everyone else includes them? Because Facebook needs more data? There surely must be a trade-off where having more trackers installed causes less conversion than the additional data could help you optimize for. My bet is this tipping point is closer to zero and definitely lower than 161 requests (!), like the example from a tech newsite below.

A/B test yourself out of this one

As an industry, let’s just stop this madness! I don’t think anyone seriously looks at this and thinks: this makes things better for users, good to go, ship it. So let’s clean up the web in 2019 and make it fast and readable again. Then, hopefully someday, when our grandchildren surf the clear azure (/self-hosted) waters of the internet, the only proof of internet pollution that remains is the stories they read from the fast-loading websites that still tell about it. Without crapbars.