The last two weeks we have been busy improving and adding some additional features to Thymer, based on the initial feedback (thanks everyone!). Here’s an overview of the changes you’ll notice most: 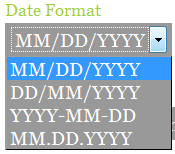 Some German and Swedish users pointed out they would like to see support for date formats used in these countries. As we want Thymer to work for people in many different countries, we started out by added some additional date formats. More to come.

It’s now possible to leave comments and discuss tasks without having to leave the page. An option to view the discussion on a separate page is also still there. As we also happen to often close a task after leaving a comment (like “I don’t think it needs to be improved any further”), we added an extra completed button which will post the comment and mark the task as done.Â  Comments can also be edited now.

Some of our users told us it would be useful to be able to edit a task by simply double clicking it. We added this feature too.

Fixes and other improvements

For all those who signed up for a beta invite, watch your mailbox the next few days.

Have a nice weekend!