First of all, just wanted to say last week has been such as rush! As most of you probably know by now, we got covered by Mashable (thanks for the great write up!). After that there were many many tweets, even more people signed up and we got a lot of emails and feedback. It’s an amazing feeling to get all this feedback, so a big thank you to everyone! It’s great to hear many of you liked Thymer, and we’re doing what we can to keep on improving it. It feels our little startup is really starting to take off!

Enough daydreaming, back to the working part! We have big plans for Thymer in the future, but we started out building some of the most requested features. So, here they are:

Tags already worked, but they were just visual helpers. It is now possible to filter your task list by tags. The tag list can be found under the project bar and shows which tags can be filtered on within the project (or, when no project is selected, shows all tags). You can add as many tags as you want to any task. When you filter a project on a tag, that tag is automatically added to any new task you create. This means you can use tags to further sub-divide your projects. Or, if you are a fan of the GTD (Getting Things Done) system, you can use them to describe things like contexts. Tag filtering for reports will be added soon.

It is now possible to add tasks through Twitter. We realize this might not be for everyone, but there are quite a few users who really like twitter and their mobile phone :). You can send the tasks from your mobile phone, the web or any other twitter client. This feature is disabled by default, and can be enabled under ‘Settings’.

– Tweet your task to @stunf (either public or DM).
– Important: Start your tweet with nt (which stands for ‘new task’)
– Since @ is reserved in twitter, you can use ‘*’ or ‘+’ instead in your task description.

Example — From your Phone (Direct Message, if we follow you)
d stunf nt some new task +today +john

If you tweet your tasks in public, everybody knows what you have to do, so hopefully peer pressure will cause you to stop procrastinating and complete your task :)!

Some small improvements:
– When you create a new project, existing tasks with that tag are automatically added to the project.
– Hyperlinks in tasks are now clickable.
– You can now have spaces in project names. Spaces will show as dashes in project tags.
– Want to change the order of your projects or team members? Now you can! Check out the settings page! 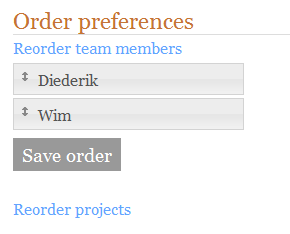 – If you create a task like this: “Buy groceries — Tomatoes / Sprouts / Cheddar”, the part after the — will automatically be added as a comment. (Especially handy if you send tasks via email)

Other features that were requested a lot include support for printing and project tag coloring. This will be added sometime soon.

NextÂ  to these smaller improvements we are planning some other big features as we’re getting closer to the first full release of Thymer. One of this will be an API. Internally we are already working with Thymer linked to several other applications. We think this will be really useful and are looking forward to showing it when it’s done. There’s some more (including some new team features), but we’ll save that for later :)

To everybody who’s currently on the waiting list: check your inbox, as we will start sending out new invites today.

As always, all feedback is welcome, and we’ll try to get back to you as soon as we can.
If you’re interested in the latest developments, make sure to subscribe to our blog or follow us on twitter (@stunf).